Troubled Homeowners Get a Lifeline

Troubled Homeowners Get a Lifeline 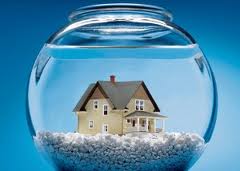 In the latest attempt to address the ailing housing market, the government on Monday announced changes to a federal program that will make it easier for struggling homeowners to refinance to today’s near-record low rates.

Under the new program, homeowners who owe more on their homes than they are worth will be able to refinance no matter how much they are underwater, as long as they are current on their payments.

More than 1 million homeowners could get cheaper mortgages as a result, officials estimated.

The revamped Home Affordable Refinance Program (HARP) will also streamline the refinancing process, doing away with certain types of appraisals and underwriting requirements, and reducing or eliminating fees that prevented homeowners from refinancing in the past.

More than 890,000 homeowners have already refinanced under HARP, which is available to borrowers with loans backed by Fannie Mae and Freddie Mac originated before May 31, 2009.

But hundreds of thousands more could not qualify — mainly because of the previous 125% loan-to-value limit on the program or because banks would not take on the risk.

The 4% mortgage — good luck getting one

“We know there are many homeowners who are eligible to refinance under HARP and those are the borrowers we want to reach,” said Edward DeMarco, acting director for the Federal Housing Finance Agency (FHFA), which oversees Fannie Mae and Freddie Mac.

Currently, about 11 million borrowers are underwater on their mortgages, with about 4.7 million of those loans meeting or exceeding the 125% loan-to-value limit, according to CoreLogic, a financial analytics company.

By the time HARP expires in 2013, the federal housing agency estimates, up to 1 million more borrowers may benefit from the new regulations.

Many of those borrowers will be from states like Florida, California, Nevada and Arizona where home values have been hit the hardest. In metro  areas like Las Vegas, for example, prices have plunged nearly 60% from their early-2006 peak.

The new rules and other details have yet to be finalized, but FHFA said that should all be worked out by Nov. 15. Banks may be able to start  issuing refinanced loans by Dec. 1.

Lifting the loan-to-value restrictions may still only help a limited number of borrowers, according to Jaret Seiberg, an analyst for MF Global Inc.’s Washington Research Group, which analyzes public policy for institutional investors.

The problem: Mortgage holders still must be current on theirpayments for the past six months — with no more than one missed payment in the past 12 months –and they also must be able to qualify for a new loan.

However, Seiberg believes, the changes should allow banks to refinance loans without worrying that Fannie Mae (FNMA, Fortune 500) and Freddie Mac (FMCC, Fortune 500) will force them to repurchase the loans if the borrower defaults.

In the past, banks have been reluctant to refinance loans because they didn’t want to take on that liability, explained Shaun Donovan, the secretary of the U.S. Department of Housing and Urban Development. By doing away with that liability, more lenders will compete to refinance the loans, which he believes will make them more affordable for borrowers.

That should help remove one of the biggest barriers to refinancing through HARP, said Gene Sperling, director of the National Economic Council.

What about us? Responsible homeowners get left out in the cold

Under the newly-revamped program, Fannie and Freddie will also reduce the fees they have charged in the past in order to enable borrowers to better afford the new loans.

Among the fees that may be reduced or eliminated are those for loan level price adjustments. Going forward, borrowers may not be penalized for less-than-perfect credit scores, for example.

Fees will also be waived for some underwater borrowers who refinance into 20-year or other, shorter-term loans. By doing so, it could help homeowners get above water faster.

“It’s an opportunity for borrowers to improve their household balance sheets by repaying their mortgages much quicker,” said DeMarco.